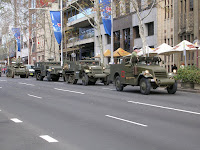 Well, we've had a busy and extremely fun and active weekend. The weather has turned beautiful (although a tad windy) and we were excited about a fun weekend. Friday we had a pint at Rosie's pub then a lovely dinner at a restaurant overlooking Darling Harbour. Hard to describe how beautiful an experience that is.

Saturday (after sneaking in an early run) we caught the bus from Circular Quay to Bondi beach. We walked the beautiful beach and then started off on a 6K foreshore walk to Coogee beach. There is a path that follows the coast and passes 4 or 5 beaches and many rocky cliffs. We stopped about half way for lunch at Bronte and sat at an outdoor cafe for a nice lunch overlooking Bronte Beach park. We strolled on and arrived in Coogee about 4 hours after we began the walk. We wondered around Coogee and happened upon a small stadium with a footy game in action. We walked in and watch for 15-20 minutes. Funny thing is that later than night we caught news footage of the game on TV. Apparently it was a big college team footy game!

After venturing home on the bus, we were a tad tired and sat on our butts for like 2 hours! Then off to a new pub called The Paragon Hotel. We had pints and good food and watched New Zealand and Australia play footy in one of the big "Tri-nations" games. The Aussie's won in an exciting finish!

Sunday was a bit more causal but still a blast! I met Delane after a run through the Royal Gardens. We were going to do a tour of the Government House. Turns out it is being worked on and all but a small area was closed. However, turns out they were having a big "Reserve Forces Day Parade" right out in front of the Government House. We stopped and got coffees and watched a cool military parade (picture of the "invasion" of Sydney above). Back home for lunch then we headed to Darling Harbour. Listened to some live music for a bit then went to the Chinese Gardens......very cool. We finished the day with a trip to Paddy's Market to start buying a few gifts for friends and family back home.
Posted by Unknown at 4:02 AM