With a few business trips that will occupy a solid 10+ days, I realized that my time in Sydney is growing short! I flipped through my "to-do-in-Sydney" list I made over the first several months I was here. I've crossed off every one of the items on the list except for the one that said "Weekend Markets". There are various markets scattered around the city on the weekends that sell fresh produce, trinkets, etc. So, I decided that was my goal for Saturday!

I headed out for a walk to the Kings Cross area for an organic produce market. It was rather small and certainly not worth the 40 minutes it too me to walk there. I guess the only good thing was that they had a booth with some good looking bread so I bought a small sourdough roll for later. On to the next market! About another 30 minute walk brought me to Surry Hills. They were having a weekend festival with music and such along with tons of booths selling produce and other goods. Sat down on the grass, listened to some tunes and ate my roll and a fruit smoothie. The picture here is one of the bands.....check out what they are wearing! 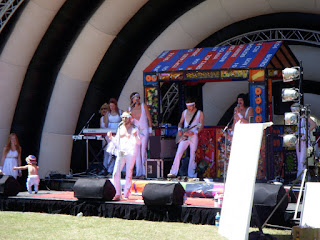 Off to the next! Pyrmont is were the local fish market is, but they had their weekend fruit/vegetable market this weekend as well. Bought some items here.....a couple avocados, some green beans, and some exceptional looking asparagus. At this point I'm wiped out from my tour-de-markets, so it's time to head back for a rest! I stopped off for a coffee and some people watching in Darling Harbour and then stumble back to the apartment for a rest.

The coolest thing about my market tour was it really got me walking through some of the inter-city cool neighborhoods. I've run through a bunch of them, but it was neat seeing all the areas with their individual personalities.
Posted by Unknown at 12:58 AM

Hey there. It sounds like you had a fun day on Saturday. Lots of walking and then you had things to carry as well. One of those fun but exhausting days! And nice to be able to cross off those items on your "to do" list.
Take care. Love you lots,