I decided it was high time to go walk up the Sydney Harbour Bridge pylon to get a birds eye view of the harbour. There are 4 pylons, two on each side of the bridge. Contrary to standard logic, the pylons do not support the bridge. They were put there just for aesthetic reasons, apparently. One of them has an office for CityRail, two of them serve as vent stacks for the tunnel that goes under the harbour, and one is open for walking to the top of. They say it's 200 steps to the top, but it only took a few minutes to walk up the steps to the top. There are several stops along the way where they have signs and other exhibits highlighting the history of the bridge. 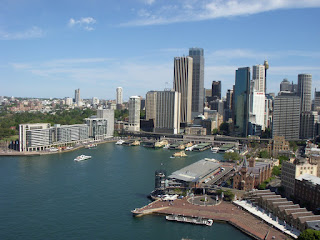 Here is a cool shot of the area called Circular Quay (note the ferry terminals) with downtown Sydney (or the CBD as it is referred to...Central Business District) in the background.
Posted by Unknown at 2:42 AM