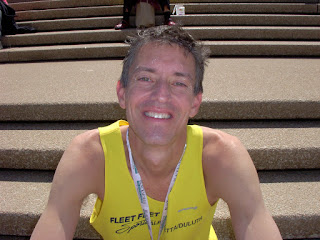 To be honest, I was a bit worried/nervous about this run. I've had a pretty rough work-week; Arrived from the US Monday AM, straight to the office, and not home most nights till 9:00 PM. Friday I actually got called at 4:45 AM and didn't get home from the office until almost 1:00 AM Saturday morning.....an exhausting 20+ hour day. Not a great start to resting up for the run.
I laid around a bunch on Saturday. It was a bit cloudy out and made for a great day to do next to nothing! I did manage to take a 15 minute jog over to the fish market to get my favorite Scones for breakfast and then jogged home.....nice and easy for sure. In bed at 10 and up at 5 and slept like a baby
The marathon started at 7:15. At about 5:30 AM I called my running bud Dave from the States. I was trying to rationalize a good strategy given a serious lack of marathon distance training. This was by FAR the most under-prepared I've been for a marathon. Dave and I settled on what is a radical strategy for Jim; join the 3 hour pace group and run steady!!!
I left the apartment around 6 and walked the couple kilometers over the bridge to the start. It was chilly, but I didn't want to hassle with a bag check, so I grabbed a trash bag and put it on over my singlet. It proved to not quite provide enough warmth, but I claimed a discarded jumper from the half marathon discard pile and was reasonably toasty till the start (temp was maybe 48 at the gun).
I locked in with the pace group at the start. The first 2K required that we climb over the Harbour Bridge.....beautiful but a decent grade up to start the day. As Dave warned, the pace seemed easy. I was super comfortable with the 3:00 pace. Will try to not bore you with all the course details, but; The first half was fairly rolling with some low/medium grade hills but most of them were quite long. But this obviously meant that there were similar long downhill grades as well. I linked up with a guy from the Australian Army and ran most of the first half with him. At a turn-around I realized I'd gotten about 30 seconds ahead of the pace group. I dropped off just a bit and after a couple miles was back with the 3:00 group. Second half was pretty fair. I was still feeling pretty good at the 18 mile mark.....breathing was very easy but my legs were beginning to tire. With about 7K to go the minor suffering began. It was the time I knew would come......one run over 17 miles doesn't equate to proper training for 26 miles. I let the group go but didn't drop off the pace too bad. It was heating up, too....sun was out and it was 65 or so. The last 4K were totally flat and all on my normal running route, so I knew it was in the bag. No cramps, no walking, just a slower pace...the legs just weren't responding.
Not sure what the official time will be, but my watch showed 3:03:55. I can honestly say that given my preparation level, sticking with a reasonable pace early made it 3:03 instead of 3:15 or 3:20. If I'd gone out hard the pain would have started much earlier. Dave; thanks for the good advise!
Beautiful course, beautiful day..........the only way it could have been better is if I'd had family and friends here to celebrate with. Thanks to all for the well wishes.
Posted by Unknown at 10:09 PM

I think it is so cool that you get to really know the places you visit because you travel them all by foot. You probably know Sydney better than the natives!

Sorry our paths didn't cross while you were home - November?

Hey there! Congratulations on your good run-I do wish I could have been there to see you. The temp was soooo much nicer in Sydney than the hot, humid weather we've been having back here in the Carolinas. Talk about melting AND having a hard time breathing! 48 degrees sounds like heaven!
Love you son, :)

Hey there! Congratulations on your good run-I do wish I could have been there to see you. The temp was soooo much nicer in Sydney than the hot, humid weather we've been having back here in the Carolinas. Talk about melting AND having a hard time breathing! 48 degrees sounds like heaven!
Love you son, :)