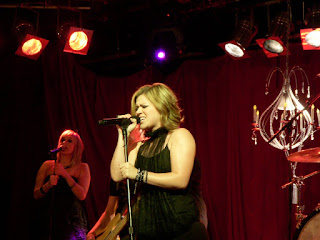 We'll, I figure I'll be happy when it's time to go back to work.....having fun is tiring! :) I woke up early today trying to shaking off a bit of dullness in my head. About 3 glasses of water and a couple aspirin did the trick. I was wanting to head up to Manly (in North Sydney, on the beach) since they were having a big Jazz Festival.....but I also needed to get a run in. So I combined the two and headed out to run to Manly. It is a fair way away and I promised myself I'd run for no more that 1.5 hours then walk/bus the rest of the way if necessary. Ended up being only a few K away at the 1.5 hour mark, so I walked the last bit. Got to Manly STARVING so I grabbed some grub and sat on the beach listening to a band play. Hung out in Manly for a couple hours and then hopped on the ferry for the 30 minute ride back to downtown Sydney.

After getting cleaned up and a bit of dinner, I headed down to a small concert venue at the Fox Studios complex with the HR Director from Coca-Cola and her daughter and cousin. We were there to see Kelly Clarkson (free tickets from work). Literally, the place was PACKED, but it only held maybe 1000 people. We had the 8 year old with us, so the security guy drags us around behind the stage and out the other side to a PRIME area with good views for the shorter little girl. Kelly was in Sydney for Australia Idol, apparently, and decided to do this private show....I'm not sure how you got tickets....they were not available for sale.

Anyhow, I stood maybe 10 feet from the stage while she played for about 75 minutes. Good music and performance, and the small venue made the crowds fun! I took a ton of video and pictures....will post a bit later.
Posted by Unknown at 8:14 AM

Sounds like a great long weekend! We had a good weekend,too - including a chance to spend some time with D at the Duluth Fall Festival. AND THEN, we came home to watch AUBURN beat FLORIDA - War Eagle! Good stuff!