I've had this race on my calendar the moment the 2010 race ended.........it's a beautiful course, extremely challenging, and extremely well run by GUTS. It also delivered a beating unlike many other races. No way I was gonna miss it. I wanted revenge on that course.

I packed the bags early Saturday morning. I went down to Oakland Cemetery early in the morning for a photography class field trip then hit the road at noon for the couple hour drive to Chatworth GA and then on to Fort Mountain State Park.

The GUTS crew was busy prepping the course and I had fun marking the "Tower" loop with a few other friends. We made it back in time for the Pasta dinner and social time. Met some nice people coming to pick up their numbers including a couple who came up from Charleston for their FIRST marathon. In the back of my mind, I thought "this ain't a good first marathon" but I gave them some course tips and wished them luck. More on that later........... 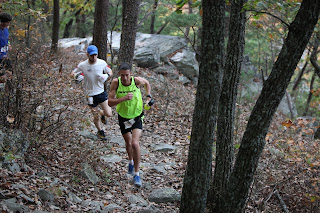 I was lucky to get an offer from John to crash at his place 20 minutes away so Kate, Aaron, Anna, John, and I headed back around 8. Was able to get some decent sleep after my Auburn Tigers were getting pounded and I didn't feel the need to stay up for the last bit of the game for the beating.

We were up bright and early so Kate could get to the start to prep for her volunteer duties. Fine by me, as I got to grab an excellent cup of joe courtesy of Drew and get the blood flowing a bit. Race Director extraordinaire Kim Pike asked if I'd lead the race out for the first 1/4 mile as it's kinda tough to mark the road where we start. Great, pressure already! :)

It was a flawless day for a race. I felt just a touch chilled in a singlet and knew it was my ideal temps. It would get hotter later, but I knew I'd be done before the heat hit too bad. And we are off..........

First mile is flat around the lake and I was a bit shocked to see a mid-6 ring up on the GPS after the first mile. It didn't take long for the course to show it's true colors. I had an awesome time running most of the first 7-8 miles with Drew. He and I battled it out last year and I suspected it might be the same again this year. He was running very strong. Around mile 9, he fell back a bit and I was on my own until the aid station at 11 before we split with the 12 milers and started up the dreaded Power Line hill. I started up the huge hill and a guy blew past me with relative ease. It was Jason Hanlin who I'd met at Sweetwater H20 50K earlier in the year. I had a blast running with him from 11 till about 18. I saw his easy stride and knew he'd have to blow up badly for me to hang. It was all I could do to stay with him and finally I had to let him go at 18.....the huge climb was coming up and I needed to bank a little or it was gonna be a tough last 8 miles.

The mile 19 and 20 climb is hard to describe other than to say it is never-ending, steep, and takes all the will you have to keep moving at more than a snails pace. I ran/speed-walked but knew I was loosing plenty of time to Jason. I felt good but was ready to be done. Even after the massive uphill, the course is still very challenging until you get to 25.5 and get to barrel DOWN the power line. I arrived at the 25 mile aid station and yell at Sarah Tynes "how much farther"? She confirmed 1 mile to go. A quick glance at my watch said I had 5:30 to make it under 4 hours and I knew it was a bust. I had no goal for this race other than to run strong, but I could almost taste a sub-4 and I blew through the last mile with everything I had. Came across 4:01:05, 2nd place, and 3 minutes faster than last year. Very pleased with a solid effort.

Oh yeah, back to the first time marathoners: I heard later than Jason Rogers was driving back towards Chatworth about 8 hours after the race started and saw a couple people with race numbers walking down the road. Apparently my Charleston friends missed a turn and ended up on a paved road somewhere way out. He gave them a ride back to the park. Feel bad for them.

Great GUTS event and a ton of fun with friends!
Posted by Unknown at 10:18 PM

Organized, responsive, and proactive in their approach, they continue to be great partners to work with. web design agencies portland, or