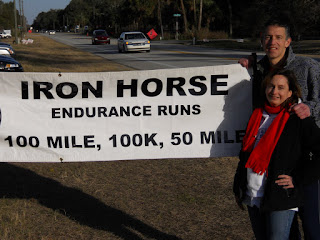 I have come to realize that there is very little personal accomplishment without friends and family there to provide support and encouragement. So while this might be a report out on my first 100K, it's really a reflection on all those who make each of us who we are.


About 2:30 Friday, I started to wonder what I was getting myself into! Delane picked me up at work and the snow was coming down hard.....and we had a 360 mile drive down to Orange Park Florida.....the hotel location for the Florahome, Florida Iron Horse Endurance Run 50M, 100K, and 100M event. After 4 hours of driving snow and sleet, we finally popped out of the severe weather and I was able to think about the fact that that I was running my first 100K in 12 hours.


I started the year with the goal of running 100K and began looking for suitable events.....and realized quickly that many were already filled. A GUTS member pointed to the Iron Horse Endurance Run. My first thought: Florida should be nice and flat. Somewhat a distant second was the realization that the race was like 4 weeks away and my long run in the preceeding 2 months was a leisurely 13 miles on the Silver Comet trail. Never claimed to be real bright! A quick email to the race director Chris confirmed there was still space and with little thought I stuck and stamp on the envelope and my fate was sealed.


My friend Nils pointed me to another GUTS guy, Ryan Cobb, that was running the 100 miler and I was happy to have someone to meet up down at the race. We both arrived too late for the race briefing at the hotel and after a brief 5 hours of restless sleep I tapped my wife on the shoulder and told her time to roll! It was a good hour drive to the start (Florahome is not close to much) and I cruised in around 6 with an hour to prep for the start.


The Iron Horse is held on an old railroad bed. The tracks are gone but not much else in the way of improvements. Lots of gravel...more on this later! It was a simple route....out 1.75 miles, turn around, back to the start/finish, then a long 11 mile out and back for a 25 mile round trip. I'd do the full loop twice then cover 12 miles to get the 62 mile distance.


Lots of nice people milling around before the race and a warm fire to help out with the chilly 38 degree temps.


And we are off.......after the 3.5 mile out and back I realized that flat didn't always mean easy! The trail was somewhat rocky and LOTS of spots with gravel that played havoc on the legs.....always had to watch the footing and I knew the uneven terrain would only get worse as the body tired! The first 25 mile loop came and went with little fanfare. Got to see Delane at a few aid stations (very friendly course for spectators) and it brought a smile to my face each time. But I knew it may be a long day when I realized that my watch said 3 hours flat. That was marathon pace, not 100K smart. I made a mental reality check and backed off to a more sane pace. Loop 2 was a much more sane 3:38 time. I was beginning to really look for my beautiful wife at each aid station for that smile and word or two of encouragement. Much needed. I was at 50 miles and knew it'd take all I had to do the final 12 miles. I was still running at this point but the pace was dropping fast!

I never thought I could hate something the size of a gold ball, but I started to really dislike the gravel! It had beat up my feet and legs for 50 miles and I swear I stepped on every errant stone the entire rest of the run! I took a few brief walking breaks to try to muster the energy for a decent finish and when I realized I had a mile to go there was much renewed energy....something about finishing my first 100K gave me new found strength. I can't describe the pleasure of crossing the line with my wife's big smile and the RD handing me my first belt buckle. It's something maybe only ultrarunners might know. I'm usually pretty interested in how I placed, but in this race it seemed almost secondary that I'd managed to cross the line in 1st place in 8:38. Happy with the win, but more excited about the finish.


I was so pleased to see Ryan Cobb wrapping up his first 50 miles and heading out for the next 50 looking fresh and energized. I had no doubt he'd bring it home! He finished his first 100 miler in 22:11. DWD Ryan!
A huge thanks to my training partners, friends, family, and especially my wife. She spent her Valentine's weekend standing out in the cold for 9 hours...her strength is my strength.

Great race report, awesome time and congrats on the win, too! Not bad at all for your first 100k (big understatement!).

I found this report by searching for iron horse 100k shoes.

I'm curious as to which shoes you wore and/or which ones you would recommend for the surface.

Hey Mark; I've got a couple friends from the GUTS (Georgia Ultra and Trailrunning Society) club heading down from Atlanta for the 100M.

I wore Brooks Cascadias. It is a nice stable shoe without too much weight. I think you could get away with a pair of road shoes but I wouldn't recommend a minimalist shoe. A mid-weight training with some decent cushioning will make your feet a little happier. Best of luck on your first 100K!

I'll look for and say to the GUTS friends when I see them.

I've been thinking about the Cascadias. I've so far been running in Asics Nimbus for off road - sand, grass, gravel and a little mud - they've been ok so far.