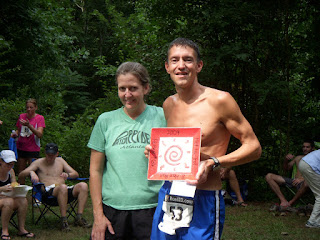 Well, my first super-ultra is under my belt! My previous longest race had been a couple 50 kilometer races (31 miles).
The Hot to Trot is an 8 hour race on a looped mostly trail course in Decatur. Each loop was 1.116 miles with a stretch of road maybe 200 yards. The trails are pretty good.....very narrow, some roots, a bunch of boardwalk sections, and LOTS of poison ivy! The small trail made passing people a challenge but everyone was so awesome and would tend to move aside when needed. I'd been very under the weather for the 2-3 weeks leading up to the event. I'd been coughing so much I'd pulled a muscle in my side. Just the day before the run, I wasn't sure I'd be able to run at all. It was very painful and I'd not really been able to walk well. That plus my limited training caused by being sick and out of town a bunch) did not leave me very optimistic! But my side was feeling better the night before so I decided I'd give it what I had.

Being my first ultra, I packed gear like I was gonna be gone for days! :) Since it was a loop and I'd be coming back past the start line tons of times, I had; 3 pairs of shoes, 3 pairs of socks, enough fluid to fill a pool, 2 PB&J sandwiches, and enough other snacks to sustain me for several days.

It's a small friendly group that all started congregating around 7:30 for an 8 AM start. I lathered up in Petroleum Jelly and headed over the the start line. My goal was to try to run NO faster that 7:30 miles for the first 20-30 miles. The race director gave the "go" and the group headed out. It quickly thinned and I found myself running with Bryce and John in the lead. They both eventually passed me and took over the lead.

I'd promised myself that I'd start taking fluids after no more than an hour.....it was HOT and HUMID and I didn't want to crash with 8 hours in front of me. I grabbed my first bottle of water after an hour and pretty much carried on each lap for the rest of the race. I was feeling good for the first 20+ laps (22 miles) but was starting to get a bit overheated. Then my friend Dave appeared at the race to help out. He was like a gift from god! He took charge of getting me cooled down via towels, cold hats, and iced beverages each time I came around a loop. I was still holding steady after about 30 laps and had taken the lead sometime during the first 30 laps but was definitely starting to take a bit longer at each rest break at the start/finish. I was well over my longest run ever and pretty much told myself I'd be happy with 45 miles total.

Delane arrived around 12:30 (4:30 into the race) and she was really a sight for sore eyes. She could tell I was suffering and looked concerned but supportive. There were several times during that 30-40 loop stretch that I honestly thought about calling it a day. But I was in the lead at this point and it gave me strength to continue. Sometime around then, someone filled me in on the sponge bucket! The sponge bucket was a tub with tons of ice water and sponges filled by the volunteers (who were awesome, by the way). I started hitting the sponge every lap to keep my body cool . It was approaching 87 degrees and while my legs were tired the bigger issue was dehydration and keeping cool. I was drinking almost a full bottle of ice cold water every lap at this point.

Sometime in here, Dave came back by after a break for lunch. He brought some more ice for my cooler! When I hit 40 laps (44 miles or so) I asked the race director how many I needed for 50 miles. My brain was too slow to get the math right! 50 miles was 45 laps so I set my mind on getting 45 laps and calling it a day! 50 miles seemed a solid goal. At this point I was about 2 laps ahead of the nearest guy but I knew he'd take me when I stopped at 45. I remember telling Delane at 43 that I had 2 more and I was done. But I hit 45 laps/50 miles with about 40 minutes left until 8 hours. I had a bit of a second wind and thought I could manage another lap or two. While different from other runner's approaches, I had not really walked at all at this point. Other than aid station breaks, I'd kept running the entire time. But the pace was definitely getting slower. I was down to maybe 9:00 miles and factor in a 1 or 2 at the aid stations and I was doing each loop in 10:30 or so.

I told Delane I had 2 more laps in me and I took off for lap 46 with a bit of a walk break to start off. I got back around and told Delane I was done after this lap. I was suffering. Legs were cramping, mind was fogging, and I'd lost all will to compete. It was one of those times when I just couldn't find it in me to continue. I finished lap 47 and Delane was at the finish with the camera in hand...she knew I was done! She took some photos and I enquired about John, the second place guy. He was running incredibly strong and was only a lap back. They told me he just taken off for his 47th. I knew he'd finish 48 and beat me. I looked at the clock and it was 3:39.....I had 21 minutes left. Some I dug deep and headed out for lap 48. It was actually a good lap, as I knew this was it.....there would be no time for a 49th. I smiled and cheered on the other runners on the lap as I made my way to the finish. Since there was no partial credit for laps, when I hit the finish line in 7:51 my day was done, clocking 53.5 miles.

John came by the finish at 7:52:30 having just finished his lap 48 as well. To my surprise, it took off for lap 49! He had 7:30 to finish 1.116 trail miles and the way he was flying I thought he'd find a way to make it happen. I was actually cheering for him.....if he hit the line before 8:00 he'd have finished 49 laps and the win. As the clock roll towards 8 hours, we could see he hadn't hit the 200 yard road section yet. He finished up very strong at 8:01 and looked like he had more left. Very impressive, but his one minute over 8 gave me the overall win!

A cool volunteer brought me a New Belgium Fat Tire as a "prize" and I savored it! A bit of recovery and I started to feel alive again. A great group of folks....the GUTS people are awesome......made this an amazing event. Nils even arrived at the end. Nice to see him! They had the grill cranking and I enjoyed a vege burger and some snacks after the race. A few random drawing prizes were given away and I got a nice custom plate and a gift certificate to a local running store for first place!

Proud of my accomplishments.....22.5 miles longer than I'd ever run before, a new course record, and 1st OA. I'd like to say I felt great the rest of the day, but I was suffering pretty bad Saturday evening. Much more alive by Sunday AM and the limping is fairly limited now. Starting to think about my next run....but not 53.5 miles! I am in awe of the people start do that distance repeatedly.....it was by far the toughest thing I've ever done. Hats off to all the runners....especially Kate the first female OA that finished over 51 miles and John who is an animal! Incredible. A special thanks to Dave, Delane, Nils, and all my running friends for the support and encouagement.
Posted by Unknown at 4:12 PM

Nice report!! Good to see you running strong all day. Congrats on the win and new record! I was thinking, "Who *is* that guy?" :)

Congrats on a great race! I was one of the back of the packers you passed numerous times. You and the rest of the front runners were inspiring. Great race and nice report.

Way to go!
You almost make it sound easy. :)
(Maybe not as easy as the 3 laps I did, but not much harder. hehe)